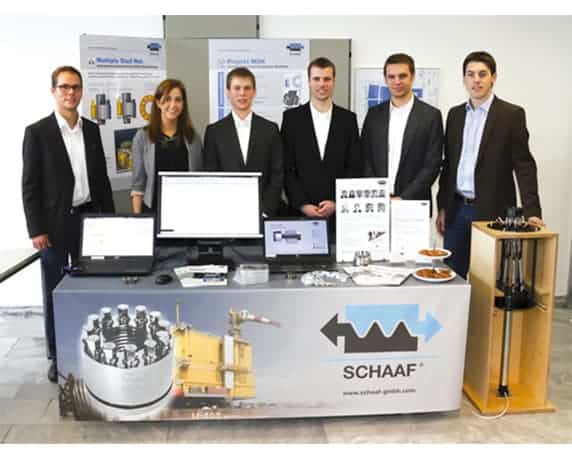 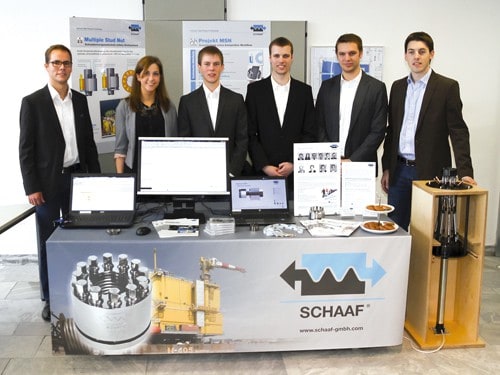 On 23 and 24 January 2014, the project days in the Department of Mechanical and Process Engineering took place at the Hochschule Niederrhein Krefeld. In these projects, the students work on tasks set by a professor or an external company. For the first time, the Erkelenz-based company Schaaf was also one of the clients.

The project group consisted of 6 students who had been working on the topic of Multiple Stud Nut (MSN – several screws tightened simultaneously and evenly using torque and axial pretensioning technology) at Schaaf since October 2013. Philipp Thönnißen, Lisa Wischmann, Thomas Brenner, Thomas Lönes, Torben Lang and Daniel Kleef (from left to right) took on these challenging tasks.

The entire workflow of the Multiple Stud Nut was recorded, analysed and ultimately improved. The tasks were divided into quotation preparation and calculation, design, raw material, production, labelling, assembly as well as tests and inspections. Here, particular emphasis was placed on clear structures and more efficient processes.

The results of these 1,200 hours of work were to be presented to the auditorium of the Niederrhein University of Applied Sciences on 24 January 2014 in a project presentation and the project stand. It should be noted that the project group did an excellent job. The jurors of the Niederrhein University of Applied Sciences also recognised this, so that they honoured the engineers of the future with 1st place for the best project result.

“A complete offer to the customer,” were the words of the project officer in the Department of Mechanical and Process Engineering, Prof. Martin Deilmann. In this spirit, the globally active company also wants to optimise its products in the future with young, dynamic working groups in cooperation with the Niederrhein University of Applied Sciences. Within the framework of KIA (Cooperative Engineering Education), Schaaf offers extensive support as well as practical project participation for bachelor theses in an optimal environment.