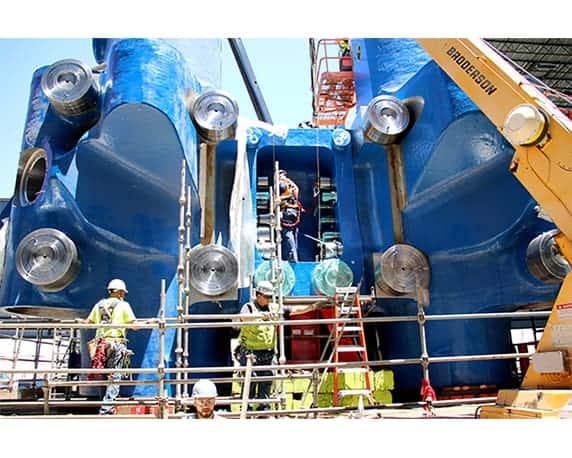 of the world-wide largest drop forging presses in underfloor design

After over 3,500 hours, SCHAAF has completed its work on the world-wide largest drop forging press in underfloor design successfully. The 60,000-ton press is the largest private investment in metalworking for air- and space travel.

In august of 2015, SCHAAF received the approval for the engineering and supply of over 440 hydraulic (hydraulic-nuts, bolt-tensioning devices) and mechanical Bolt Tensioning devices (MSN) in the dimensions of M30 up to S1000 for one of the world’s largest drop forging presses in underfloor design. Included in the scope of delivery were over 140 customer specific ExpaTen-Bolts from Ø180 to Ø400 and up to 8,500 mm overall length, as well as special assembly equipment and pumps. Said components have been delivered throughout the last year.

The assembly of the components occurred in the USA under SCHAAF’s supervision. Accompanied by SCHAAF, the first construction phase has successfully been completed over the last 10 weeks. In order to to achieve this, all the large components were meticulously lined up and finally connected with SCHAAF connection-technology. With single-component weights of up to 300 tons and installation tolerances of tenths of millimeters this has been a true challenge which was overcome thanks to a strong team on site.

The following construction phase is monitored by SCHAAF and the correct assembly of each component controlled individually. To ensure this, SCHAAF-personnel will be present at all times in the coming months until completion of the mechanical assembly, ensuring that each process step is done correctly and executed according to plan.

The continuation of the assembly of the world’s largest drop forging press in underfloor design has been completed with the lowering of the 2,500-ton 7-segmented middle piece. This was achieved by tightly fitting the segments of the foundation via approximately 80 SCHAAF connection elements.

Following the previous efforts, the crosshead was fully mounted: as in section one, the 300-ton heavy casting components were initially positioned to ‹ 1mm with ExpaTen and assembled tightly in a friction-type connection by using 8,5 m long ExpaTen bolts with Ø400 mm and cross anchors M490 / M400 and M355.

Finally, the last 1,500 ton heavy section can be lifted onto the pre-installed components. In order to give the press it’s full functionality, the last 4 main tier-rods have to be tensioned: with a length of 26m and a thread size of S1000x32 and a weight of 115 tons per piece, an unseen pretensioning force of over 150,000 kN had to be produced. This force equals the weight of approximately 25 Airbus A380 or 400 fully loaded semi-trailers per bolt.

This was created by using 2 hydraulic tensioning devices with a weight of 36 tons each. Through repeated replacement the pretensioning force was steadily increased to its final value of 15,000 tons. Via integrated weight-compensation equipment the 10-ton heavy nuts could be mounted and turned by 2 people. The SCHAAF-Service team showed great effort at this crucial moment and successfully completed the last step of the forging press’s mechanical assembly.

Summary: The SCHAAF Equipment, with over 360 tons of weight, was successfully used to complete the assembly of the forging press in a timely manner without delays. Only through close cooperation with the customer and the assembly related contractors could the on-site construction phase, the manufacturing and the final assembly be completed according to plan. In doing so,

SCHAAF has once again made a contribution of innovating mechanical engineering, realizing new ways and approaches through innovative technology.